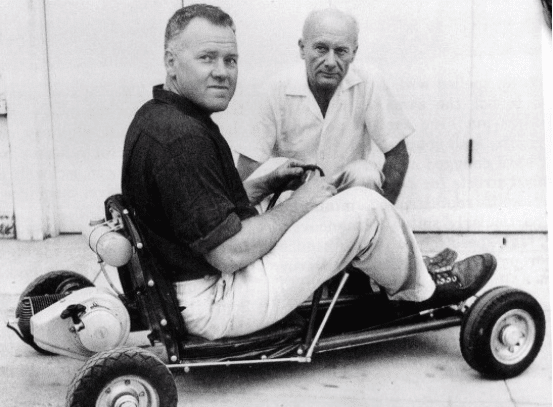 International Go Kart Week (#GoKartWeek) is an entire week in September dedicated to celebrating the history and experience of driving Go Karts.

Karting started in September of 1956 when a man named Art Ingels decided to use a West Bend 2-cycle 750 engine taken from a lawn more, slapped it on top of an incredibly simple tubular chassis and adorned the entire machine with semi-pneumatic tires. Thus the first Go-kart was born.

It never received an official name but many in the Karting world refer to it as Kart No. 1 or The West Bend. The engine only delivered 2 Horsepower but little did Ingles know that he was just created a whole new sensation that will grow to international levels.  Art drove the kart to the Pomona Sports Car Races three Californians saw the potential and decided to manufacture on a larger scale.

Duffy Livingstone & Roy Desbrow then went to start Go-Kart Manufacturing Co. Inc in 1958. Before you know it Ingles got together with the man that helped him create Kart No. 1 and established the Ingels-Borelli Kart Company. The two men then began to coalesce The American Kart Manufacturer’s Association. Many races were run in these early Go Karts in Pasadena and eventually, it grew so big that all the karting enthusiasts created The Go Kart Club of America. However, this karting sensation did not just stop in the borders of southern California and eventually over time gained popularity across the world. Thus the Go Kart Club of America eventually became The International Karting Federation (IKF)

The Future is Bright (and FAST!)

Karting is now known worldwide and it is estimated that 1.6 billion people in the world have raced go-karts. Whether it be some outdoor shifter karts on a nice long track or an indoor circuit with some electric motors pushing people to speeds up to 50 mph. Karts now can produce an incredible 18 horsepower and beyond and the electric karts have immediate throttle response making for an amazing experience with the superb performance during a race.

From what started as a Lawnmower engine used to craft the first go-kart in 1956 to the amazingly fast electric Pro-karts used by Autobahn.

There are even huge competitions worldwide such as the American E-Kart Championship which is hosted Annually. It brings over 20 participating tracks champions to battle it out in electric go-karts under one roof to determine the Nation’s best. The entry into championships like this are local leagues held at indoor electric go kart tacks across the US.

If you have not heard of International Go Kart Week before, rest assured it is for real. It is even officially printed in the most authoritative reference available on special events: the Chase’s Calendar of Events.

International Go Kart Week (#GoKartWeek) is an entire week in September dedicated to celebrating the history and experience of driving Go Karts.

Each year during #GoKartWeek Autobahn and other karting facilitieshost a series of different events from discounted rates, to fun nights to dress up as your favorite racer to help you celebrate the history of karting.

We hope you take this time to go celebrate now and jump into a go-kart at your nearest Autobahn Indoor Speedway location.

We encourage everyone to spread the word by using the hashtag #GoKartWeek!

PS: Be sure to check out THE Go Kart Racing Podcast!